K2 Cooler Review: Is it Worth Your Money?

Before, I didn’t know coolers would have such a demand. Even before working as a business owner of a food stall, I already realized how important coolers were. Depending on your lifestyle, having a cooler might not seem necessary.

This is where coolers come in. Be it for fishing, camping, food business, or even a basketball game, there are a lot of areas where coolers can help you. With that said, before owning a cooler you should look into its features first. This K2 cooler review will not just discuss the product. Rather, it will help give you a better understanding of coolers in general. This is to make sure you get the best out of your decision.

But first, consider these...

Foremost, there are two things that you need to consider before buying a cooler. Supposedly, when choosing a cooler, you should first look at how durable it is. Secondly, you should weigh its cooling performance. Coolers serve as a more convenient replacement for a refrigerator. Arguably, your cooler has the upper hand regarding its convenience. However, it significantly loses to the fridge when it comes to durability and quality.

Although it’s easy to bring, you’ll need to take extra care if ever you bought a cheap cooler. Some are made only out of cheap plastic. There are also styrofoam coolers.

Usually, when looking at the durability of a cooler, you’ll need to decide between a high end or a traditional cooler. These two types of coolers have different materials. Also, their designs also differ. High-end models are stronger than regular ones. It has features such as pin-style hinges and UV-resistant plastic. The hinge style allows the attached parts to remain intact longer. It also has walls and lids that are extremely rigid. As a result, this makes a beefier exterior.

ImageThe traditional style is less durable compared to the latter. It’s made of plastic screw-on plastic hinges together with weaker walls and lids. You’ll also notice the smaller handles that might give you a hard time gripping.

With the main features done, let me discuss it further by applying a real-life experience.

I first encountered a cooler during a basketball game in high school. The waterboys brought a massive cooler and carried it to the court. What I witnessed was dreadful.

First, the handles were already difficult to grip. Hence, the large cooler gave them a difficult time. Unfortunately, they dropped it several times before reaching the court. By the time we were there, it had a small crack at the bottom. Consequently, the water inside spilled.

This leads us to the next feature: the cooling performance. Well, it’s obvious that a cooler’s primary purpose is to cool. But what happened with that cooler back then? Apparently, the ice was placed only 5 hours before the game. Afterward, it became a little box pool. This is why you should focus on the technology that a brand presents. Is it just a simple box where you put ice and hope that it doesn’t melt? Then probably that’s a bad quality cooler.

Excellent coolers should have UV-insulated materials. Also, its inner and outer walls should be a lot thicker.The capability to put dry ice is another feature you should consider. If you’ve reached this part of the article, then it probably means you’re already sold on buying one. To give you a jumpstart in your hunt for a great quality cooler, we present you the K2 coolers.

K2 Coolers was founded in 2011.The company focuses on making their coolers heavy-duty and lightweight. These two characteristics make K2 coolers versatile. Because it’s designed to be a heavy-duty cooler, it can withstand harsh pressures. To further note, its lightweight feature is a product of plastic innovation that we will discuss further below.

Here are 4 products under the K2 Cooler Summit Series that you should check. 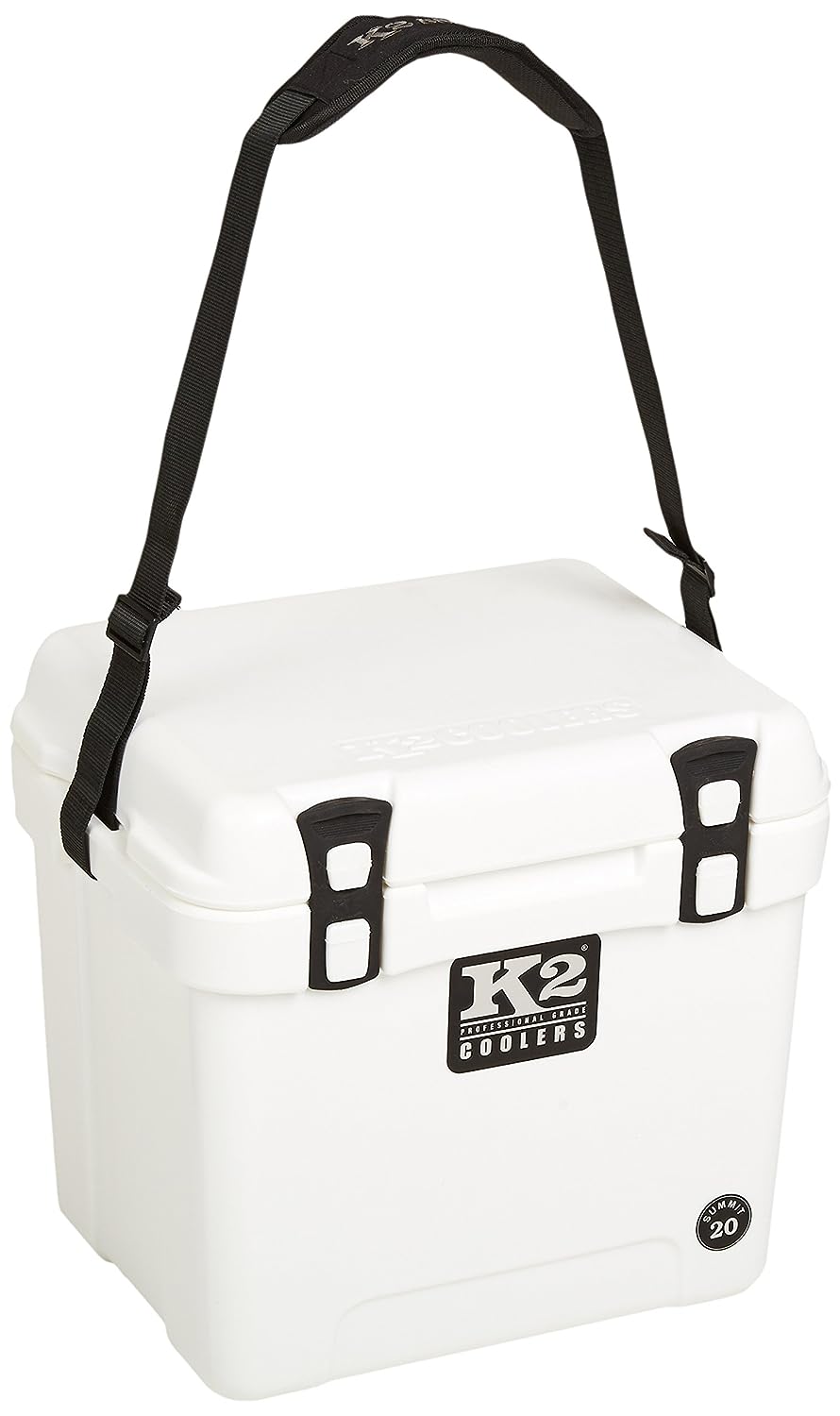 The K2 Summit 20 Cooler is a great cooler to have if you’re going out fishing alone. It’s a compact cooler that is very easy to bring. This is because of its lightweight design. Furthermore, it has a shoulder strap that makes carrying a lot easier.

Although relatively smaller compared to others, this cooler can still accommodate extra items if you have company. Because it’s easy to carry, it’s also perfect for beers!​ 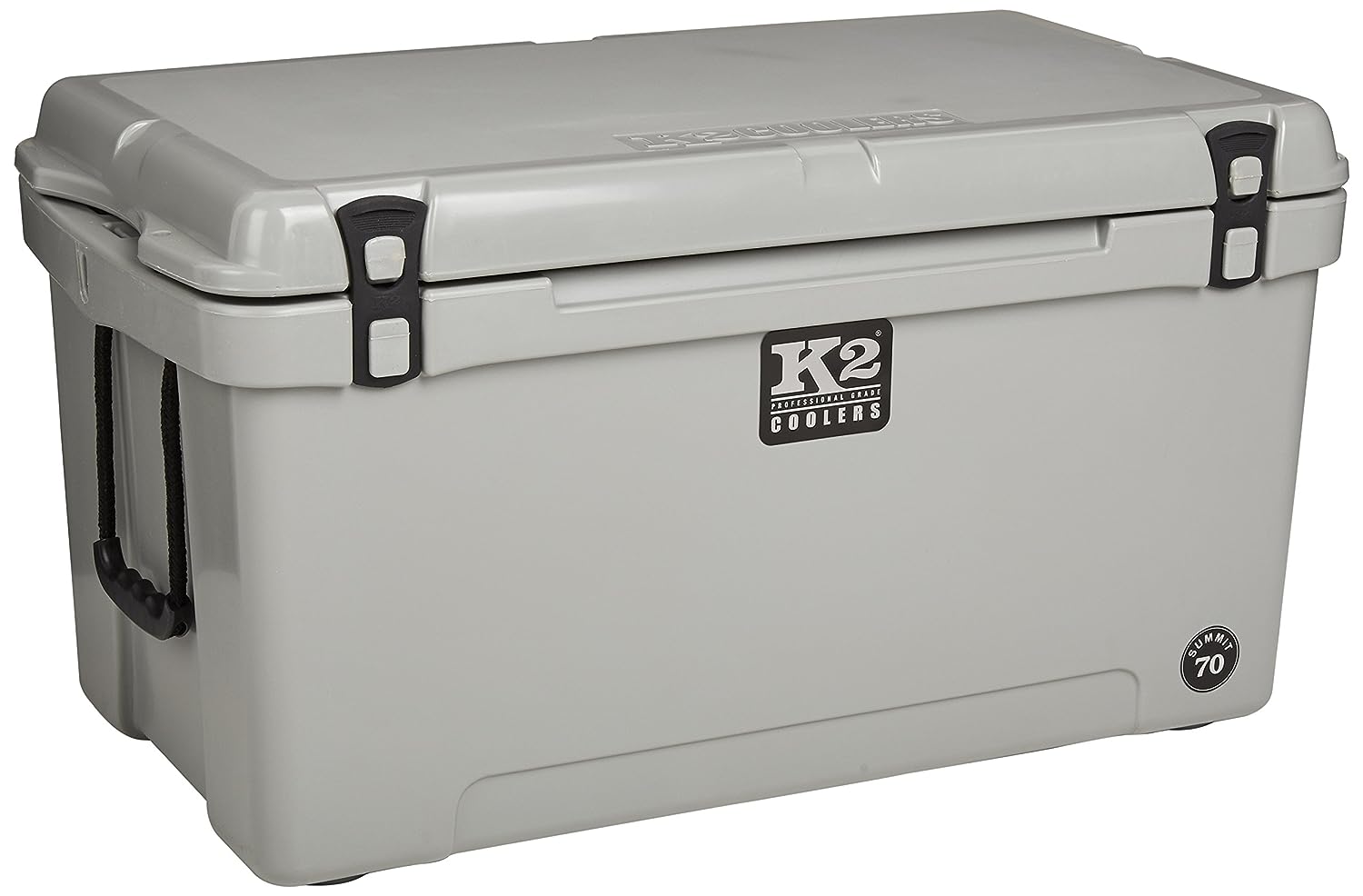 The K2 Summit 70 cooler does a fantastic job on keeping things cold. This is all thanks to its superior ice-retention feature. It has large rectangular build. Thus, it can store many items and beverages of your family members. It’s a convenient cooler to bring if you’re planning on going out with your family. 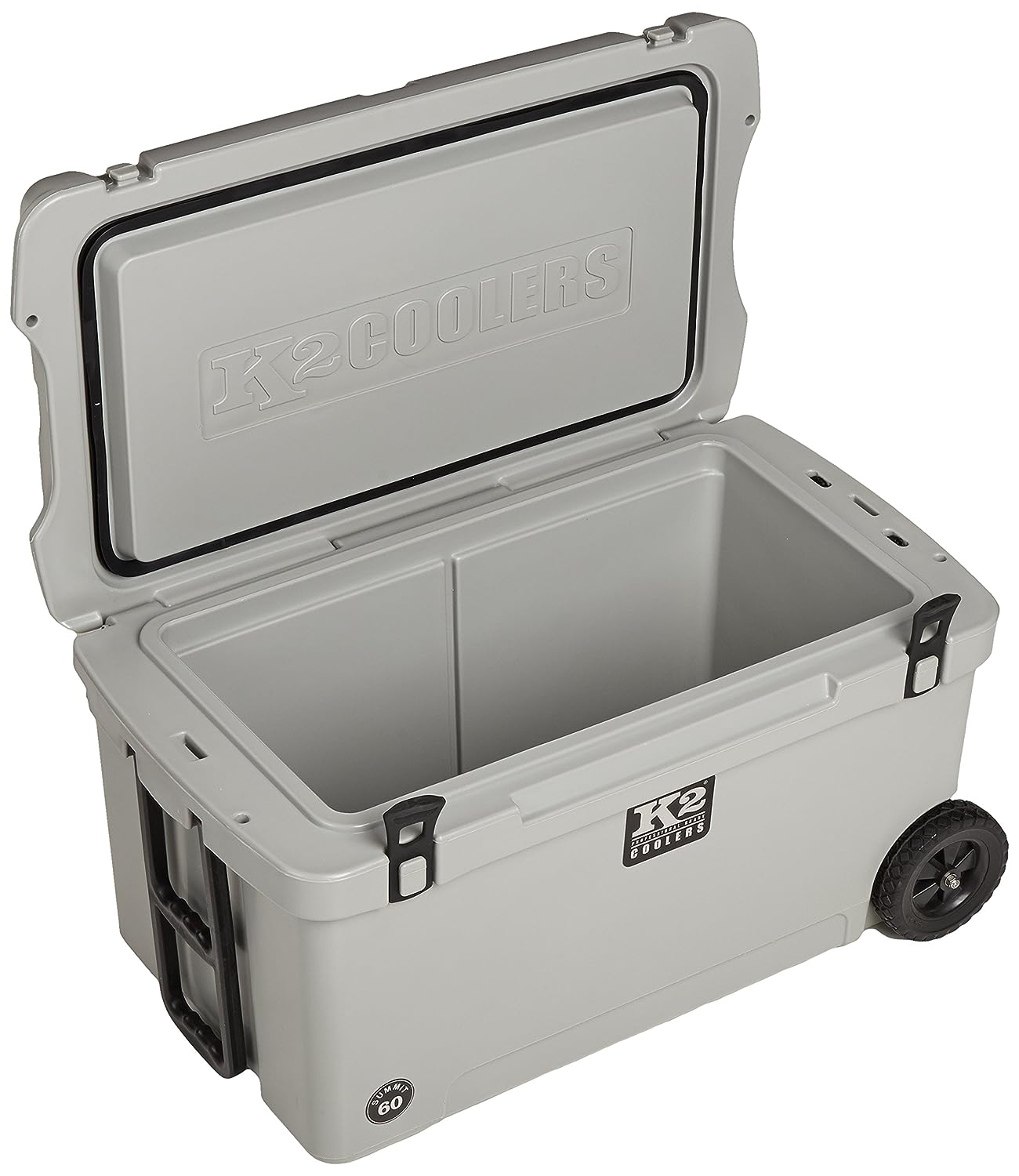 The K2 Summit 60 cooler gives you more options on how to carry it. Unlike other products, this cooler comes with wheels. This enhances its portability because you don’t need to carry it anymore. The handles that come along with it are very durable. It has a removable axle for flexibility. 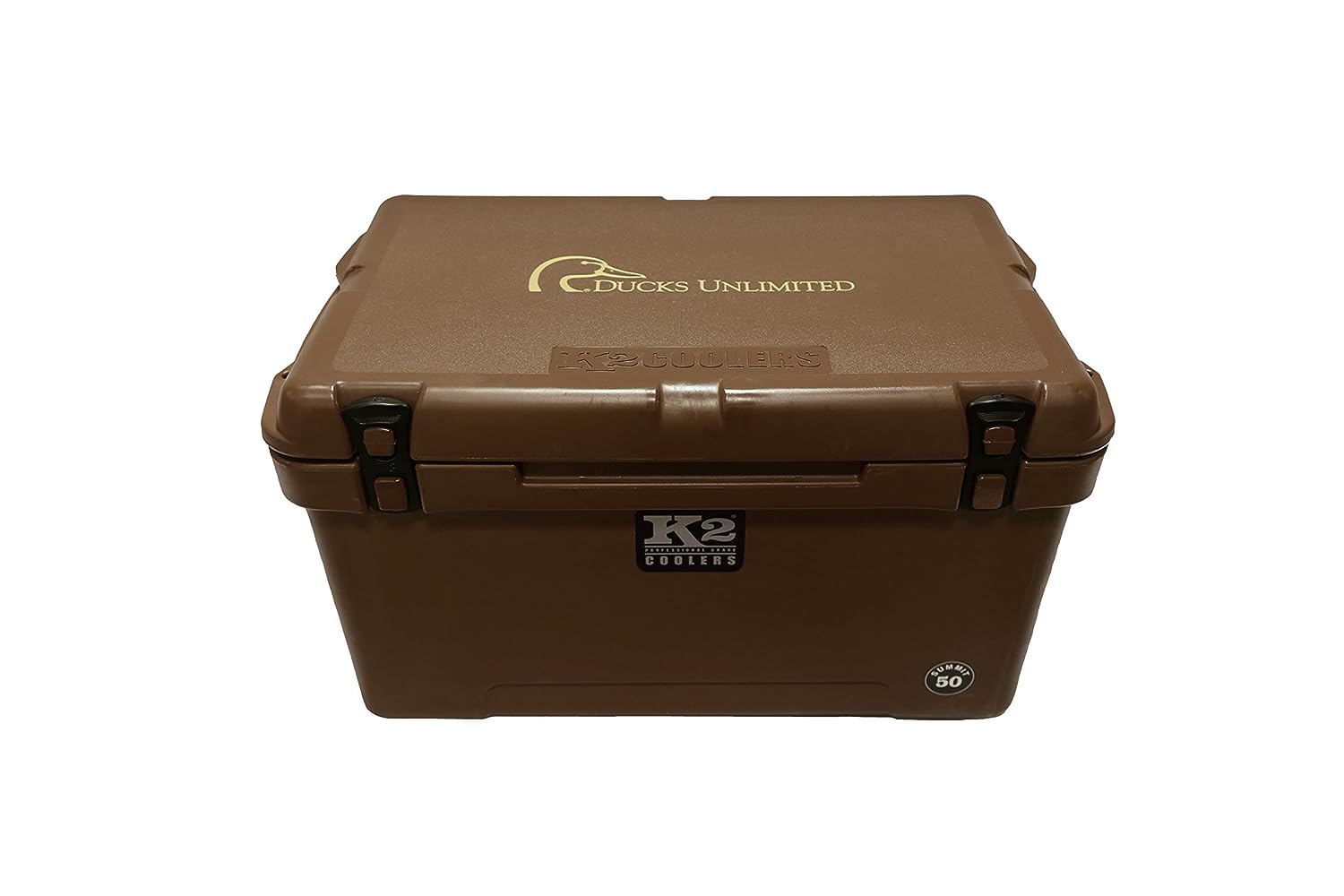 The K2 Coolers Summit 50 looks like a treasure trove that has jewelry inside. Don’t be fooled though, it has a reasonable capacity to fit well over 30 cans of beer. It comes with a sleek brown design. This gives it a very appealing aesthetic. It’s not only a cooler built for looks because its cooling performance lasts a long time.

“Real value. Real cold” is the motto of K2 cooler. This motto explains their commitment to ice retention and durability. That’s a good start if you want to purchase a high-quality cooler.

To further elaborate what a K2 cooler is, let’s discuss how it’s built. A standard technique in making coolers is blow molding. Blow molding is a manufacturing process where hollow plastic parts are formed. First of all, it begins by melting the plastic. Next, it turns it into a parison. A parison is something you clamp into a mold to follow a certain design. Afterward, compressed air is blown through a parison which creates the plastic mold. This is a standard process that is not only used for coolers but many plastic products as well. Although it’s a cheap and conventional technique, it questions its durability.

Meanwhile, K2 coolers are created using rotational molding. It’s a more elaborate manufacturing process compared to blow molding. The main difference in rotational molding is the use of liquid resin for added coating. The resin, which is either liquid or powder, is placed inside the mold. Afterward, it is rotated biaxially until the resin dissolves and coats the mold.

This process is slower, but it results in improved durability compared to blow molding. Rotational molding also allows the K2 cooler to be a one-piece product. Hence, breakage may occur rarely.

Durability is a strong point of K2 coolers. However, its real forte is insulation performance. The K2 cooler makes use of UV-insulated polyethylene. Polyethylene is a chemical substance that’s commonly found in plastics. It has high tensile strength and has great insulation. This material is also light too. Thus, it mixes heavy-duty features with lightweight portability.

Furthermore, this is the same substance used for strengthening kayaks and ice hockey walls. Greenhouses also use this to insulate heat. Polyethylene is placed in the inner and outer walls of the cooler. It follows a thickness of ¼ of an inch. Thanks to this feature, it gives a superior insulating performance. Together with this, it’s also designed for superior puncture resistance. So far so good for the K2 cooler. It turns out to be a quality product based from the two must-haves of a cooler that we previously discussed.

Apparently, polyethylene is just the beginning to reach superior insulation. Also, the product introduces polyurethane. Another plastic material that enhances insulation. All K2 cooler walls have a premium grade polyurethane foam. It’s a high-density foam that reaches up to 3 inches in thickness. The foam creates millions of “pockets” that reduce heat transfer.

The material works both ways. Consequently, the use of this substance also enhances strength and rigidity more.

What else is there?

You need to be familiar with some components in when deciding for the best K2 cooler to buy. These components were designed to eliminate the problem of replacing parts. Although your cooler may be thick as a stone wall, it still has weaknesses. Your cooler still has joints that are susceptible to breakage and wearing. It’s like a well-armored knight that lacks protection in his joint areas.

As a result of this, K2 coolers introduces a set of components aimed at eliminating this problem. Here is the list below.

What other people say

In this product site, several reviews gave K2 Cooler a 5-star rating. These positive reviews share similar sentiments. Among these, K2 cooler being cheaper among other known brands stands out. In addition, reviewers applaud K2 cooler for its convenient components. The shoulder strap seems to be the most liked due to its comfortable material.

If ever you’re not sold on the K2 cooler yet, we present three alternative products here. These could aid you in finding a cooler that suits your tastes. There are coolers that have different components and features. Hence, it gives you more options.

Arguably the most famous brand, Yeti coolers are similar to K2 coolers regarding durability. However, the prices differ significantly. Yeti coolers are very expensive when you compare it to the K2 cooler. This is a common sentiment shared by reviewers in product sites.

Yeti coolers also have a different cooling performance. The ice retention of these coolers lasts up to 5-7 days. It is designed to follow that timetable. On the other hand, the K2 cooler’s insulation performance is user dependent. Also, the Yeti cooler is arguably one of the favorites when it comes to outdoor use. It is certified bear proof. Hence, it’s ideal for camping, hunting, and other extraneous activities.

One of the best features of this is a lifetime warranty. It’s the best warranty deal among the top cooler brands. Its cooling performance also beats that of a Yeti’s. This is because it can reach up to ten days. The Pelican cooler is also certified bear proof. It’s great for your family to use or if ever you’re going out for a trip with your friends.

There are many options to choose from when buying a cooler. A K2 cooler gives enticing features that are often overlooked. For example, the reviews give positive remarks for the non-removal of the drainage plug. To add, the padded shoulder that comes with the K2 is something that keeps buyers happy. These little characteristics could give you an easier time in handling a K2 cooler. Lastly, among the alternatives, a K2 cooler is the cheapest.

Therefore, if you’re saving up while focusing on insulation performance and durability, then the K2 cooler might be for you.

RTIC 20 Cooler Review: A Closer Look at One of the Best Coolers on the Market

5 of the Best Wheeled Cooler for Ultimate Portability

Do You Need the Best Cooler? Learn from the Best RTIC Soft Cooler Reviews

Why are Yeti coolers so expensive, is it worth buying?

What Is The Best Cooler For The Money?

RTIC Cooler Review: A Look at The Best Cooler In The Market